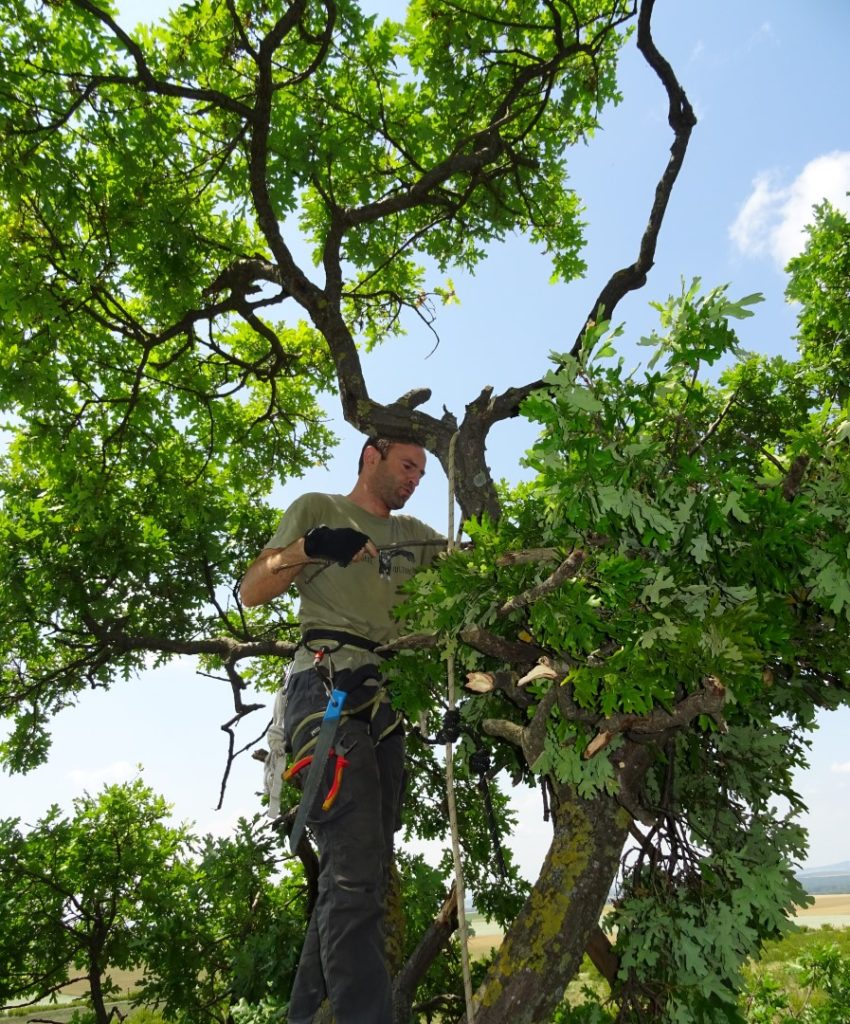 Have you heard the phrase “there aren’t borders for the birds”? The Imperial Eagle is embodiment of that sentence. It is a large bird of prey with wingspan of around 2 meters. The young Imperial eagles are foraging on huge distances. Birds hatched in Bulgaria had travelled to countries like Ukraine, Russia, Syria, Israel, Ethiopia and Sudan. In Bulgaria these magnificent birds can be observed in Sakar mountain, Dervents hills, western foothills of Strandzha mountain and the fields among Tundzha river’s valley. There are 35-40 pairs of Imperial eagles in Bulgaria. These birds are part of the Thracian population of the species together with 55-60 more pairs in the European part of Turkey.
The small population size of the species in Bulgaria makes it vulnerable to even the slightest changes in the environment in its nesting territories. Actually, little more than 20 years ago there were only 7 pairs of Imperial eagles left in the country. It is frightening having in consideration
that during 19 th century the species was marked as widespread with high population size and occupied diverse habitats. And 100 years later it was on the way to join extinct from our nature animals like the European sea sturgeon, Mediterranean monk seal and Bearded vulture.
How it had happened?
Despite that in the past the eagles had been patronized by the Bulgarians in the beginning of the 20 th century together with other birds of prey the Imperial eagle had been exterminated on purpose. In 1920s the state begins a mass campaign against all birds of prey. They had been called “noxious” and had been exterminated in big numbers. All the way till the 1960s the hunters had been obliged to present feet from birds of prey every year in order to get their hunting licenses renewed. Nowadays unfortunately there are still some birds of prey shot by poachers every year. Two Imperial eagles equipped with tracing devices also had been shot in the last few years. Disposing of poison baits is another big threat. The use of poison baits against wolfs had been a common practice even in the end of 1960s. This is a major threat for the
Imperial eagles because they are also feeding on carcass. The eagles had died in big numbers on the poison food. Nowadays the use of poison is strictly forbidden because it is a huge threat not only for domestic animals and game but it is also dangerous for us the humans. The electric power lines also are killing Imperial eagles. They are dying from electrocution when they touch two lines simultaneously. In Bulgaria big part of the power lines are of types dangerous for birds of prey and storks. The Imperial eagle likes to perch on electric pylons unfortunately it can’t distinguish which are safe and which are not.

The purposeful environmental efforts for the revitalization of the Imperial eagles in Bulgaria in the last 20 years is good an example that it is possible to save a species on the edge of extinction with execution of the right measures.
What are those efforts?
The conservation efforts for the Imperial eagle are successful because institutions, non- governmental organizations and local communities are involved in implementation of the measures. Nests of Imperial eagles are guarded in order to prevent disturbance of the birds in the breeding season from untypical human activities in the area. Artificial nests are built to
accommodate new pairs, reducing the chance of destruction of natural nests during summer storms. Future nesting habitats are created by planting poplar trees. Supplementary feedings are carried out during the winter to raise the survival rate of the birds. Dangerous electric pylons are isolated to prevent electrocution of birds. Land use management of pastures is improved as those are the hunting territories of the eagles. European ground squirrel colonies
are restored as that species is a main source of food for the Imperial eagle during its nesting season.
The international cooperation also is a key element for the conservation of the species. The project “Eagles Beyond Borders” co-financed by the Interreg-IPA CBC Bulgaria – Turkey Programme is one of those good examples for the cooperation efforts to preserve the Thracian population of the Imperial eagle in Bulgaria and Turkey. The Turkish part of that population had been counted during common expedition in 2008 of Turkish and Bulgarian experts as part of
project on the frame of the Cross-Border Cooperation program. From that year on experts from the Bulgarian Society for the Protection of Birds (BSPB) are monitoring the Thracian population together with their Turkish colleagues annually.
The success of the efforts for conservation of the Imperial eagle in Bulgaria had not been unnoticed. The BSPB’s “Save the Raptors” project sponsored by LIFE program of the European Union won first “Natura 2000” prize for nature conservation of the European Committee. It 2014 BSPB is granted the prestigious international environmental award “Whitley”. Her royal majesty
princes Anna gave the award also called “The Green Oscar” to Stoycho Stoychev for the great contribution for conservation of the Imperial eagle in Southeast Bulgaria.
The population of the Imperial eagle in Bulgaria is slowly recovering but any improvident change in the management of the environment can very fast lead to the extinction of the species.
There is an example from the last few days – a project for changing the Hunting law in Bulgaria which will allow the use of poison baits to fight against the “African swine fever virus”. A measure that if implemented is a huge risk for many endangered animal species among which is the Imperial eagle.